Donald Trump and Bill Gates. Credit card debt and sweatshops. These 33 essays, collected from The New Yorker, are by authors who were sent out to "take the pulse" of life This new anthology collects the best of these profiles, The New Gilded Age: In keeping with its tradition of sending writers out into America to take the pulse of our citizens and civilization, The New Yorker over the past decade has reported on the unprecedented economy and how it has changed the ways in which we live.

This new anthology collects the best of these profiles, essays, and articles, which depict, in the magazine's inimitable style, the mega-, meta-, monster-wealth created in this, our new Gilded Age. Who are the barons of the new economy?


Profiles of Martha Stewart by Joan Didion, Bill Gates by Ken Auletta, and Alan Greenspan by John Cassidy reveal the personal histories of our most influential citizens, people who affect our daily lives even more than we know. Who really understands the Web? Malcolm Gladwell analyzes the economics of e-commerce in "Clicks and Mortar.

And what defines this new age, one that was unimaginable even five years ago? How does this collection hold up, almost fifteen years later? Interestingly, some of it does. It's fascinating to see Trump's name pop up early in the book and read about him as we knew him in , with little idea that in , he's be. Even terrible men can be interesting.

Likewise, coming back to the story of Bill Gates in the wake of the Microsoft anti-trust case. It was a different world. The book is front-loaded with its best stuff; its human stories, the ones that stand up to the test of time because they are about people in moments of time, people that, for the most part, are still around, still doing things, still interesting. Not all of them, of course, but enough that it's fun to do the "where are they now" calculation as you read.

After that, however, things start to wander.

It's obvious we couldn't have known in what would be, how some of the problems were eerily prescient and some we could have never imagined. Does it justify your time? Depends on how you feel about leaving books unfinished. For me, it was incumbent upon me to read everything, to earn my right to complete and review it. For you, dear reader? I think it's fair if you pick this one up and, like trail mix or a bowl of Lucky Charms, pick out the tastiest-looking bits and leave the rest alone. Apr 24, Ivan Benedict rated it it was ok. This is an anthology of articles from the "New Yorker" magazine.

For a number of years I read this weekly magazine, practically cover-to-cover. But I no longer do. I had read none of the articles in this book. The writing throughout is in the high standard of this magazine. However, most of it is out-of-date. The articles are all loosely connected to themes of wealth, economy, or even non-wealth.

The New Gilded Age: The New Yorker Looks at the Culture of Affluence by David Remnick

But since the latest article is dated April , nothing relates to the recession that we still feel. So m This is an anthology of articles from the "New Yorker" magazine. So much of it is just of historical value. There are, however, several small gems.

The New Gilded Age: The New Yorker Looks at the Culture of Affluence

There are dated biographical articles on Bill Gates apparently a real schmuck , Donald Trump, Martha Stewart, and others. It was worth a read, but uncomfortable because of being dated. This ambitious collection boasts a half dozen enthralling features that one would expect from the usual excellent calibre of The New Yorker. It's supported by many more astutely observed pieces, but for this reader, the topic of wealth got a little exhausting and exhausted, tapering off amid an elitist air and too gradual pace TNGA is strongest when it's telling remarkable human stories Trump, Gates, those on the social margins, first-person confessionals. 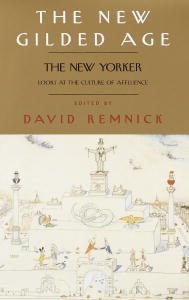 
David Remnick born October 29, is an American journalist, writer, and magazine editor. Remnick has been editor of The New Yorker magazine since