We read words like strongholds in the Bible. Strongholds are always associated with warfare. If we were honest, the battle and conflict are not limited to above our heads but rage within our heads and our hearts also. I used to love the old Donald Duck Disney cartoons where Donald is in a conflict and has a small angel Donald sitting on his right shoulder, but a small devil Donald sitting on his left. One is telling him to do what is right, while the other is telling him to do wrong. Whichever one he obeys determines what happens next in his life. I think Walt Disney captured this truth perfectly.

The Bible says in the book of Joshua that after the death of Moses, God spoke to Joshua and told him to cross over the Jordan and walk through the land of Canaan and that all the places the soles of his feet shall tread was his divine portion and inheritance. Walking on the ground has to do with dominion. When Joshua came to face the fortified stronghold called Jericho, God commanded him to walk around it. Now look at this scripture in the book of Job: Now there was a day when the sons of God came to present themselves before the Lord, and Satan also came among them.

The Battle over Prayer

Satan tells God he has come from the earth, that this is his dwelling place. But look at what activity the devil is engaging in. He is walking back and forth, to and fro, on it! Satan is doing this to claim the territory as his own. He has sought a place where his will is done, where he sits on his throne, where he rules. We are caught in the middle of this battle. Whether we like it or not, we are involved in a cosmic conflict and there are eternal consequences at stake. 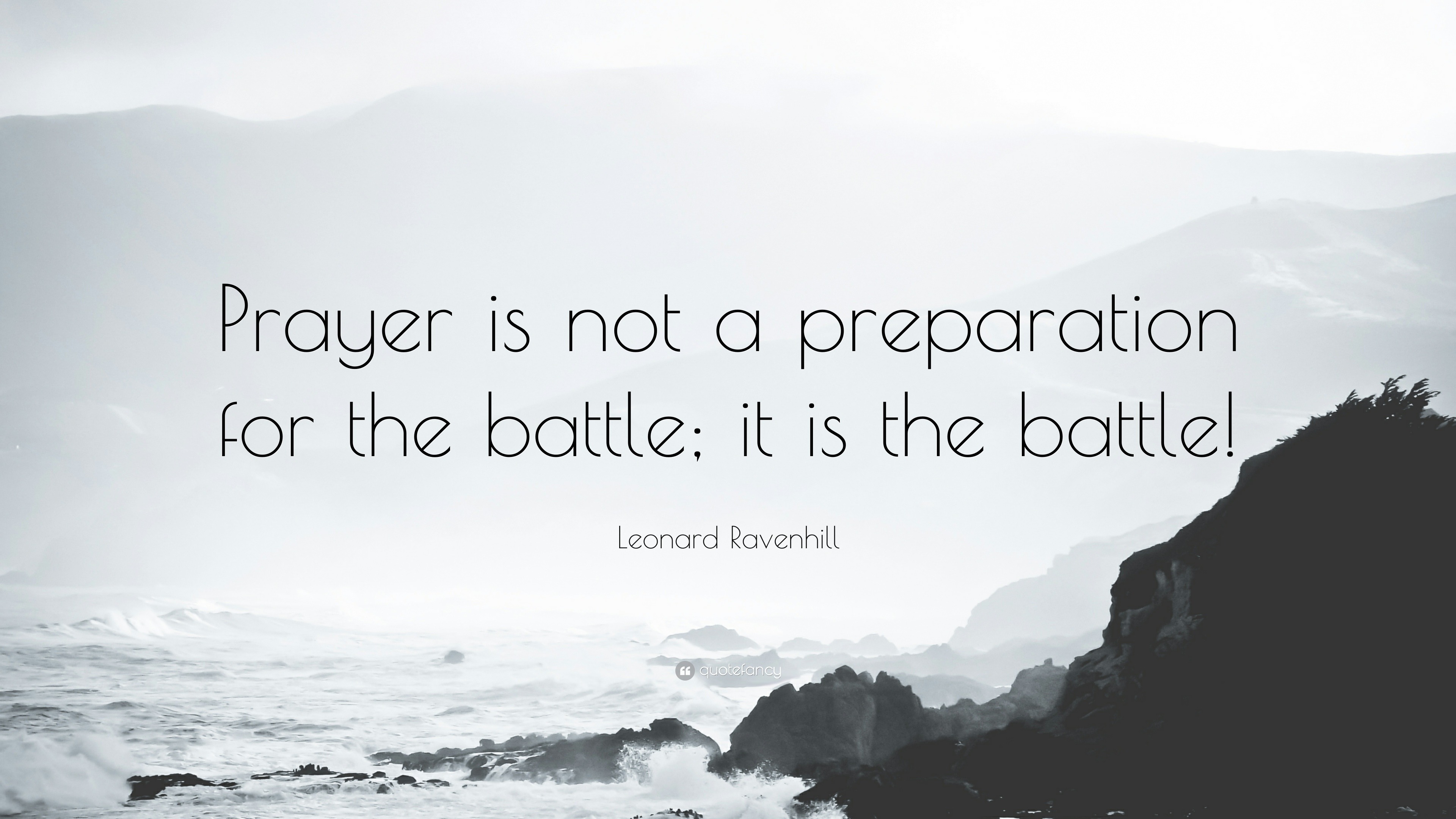 Prayer battles by pushing back the agenda of darkness to establish the kingdom of light. This is the purpose and focus of prayer. As the apostle Paul said when he was strengthening and encouraging the church,. We must through many tribulations enter the kingdom of God.

The battle is not won on the sidelines. It is won on the field. Each one of us is called to take the field and establish the kingdom. This only happens through PUSH kind of prayer. It must be forceful, focused, and effective prayer. We push to see the kingdom come first in our own hearts and lives. Then it flows into our families, our communities, and throughout the world in which we live.


Because the kingdom of darkness really exists, spiritual warfare will be encountered. But fear not, for. Prayer is the weaponry we have been given to push back the powers of darkness and thwart their wicked agenda. Through the medium of prayer we are able to rise triumphantly in each and every circumstance: Now thanks be to God who always leads us in triumph in Christ, and through us diffuses the fragrance of His knowledge in every place.

Many would prefer to believe that prayer is nice but not necessary, much like sequins on a motorcycle helmet. He prayed in solitary places often because it was the most productive activity for Him to engage in, fueling and clarifying all that He did. We are too busy to pray, and so we are too busy to have power. We have a great deal of activity, but we accomplish little; many services but few conversions; much machinery but few results. Christianity has very much Westernized during the last few hundred years and has developed a somewhat dysmorphic perception of war and battle that is not consistent with the teachings of the Bible.

Our very anti-war culture believes that peace can be obtained without the use of force or the exercise of authority. It requires an intervention of authority and justice to rein in the antics of the bullies and neutralize their negative influence. Jesus describes the devil as a thief who comes to steal, kill, and destroy John Amazingly, many twenty-first-century believers think Jesus was using hyperbole here to describe Satan and his agenda.

But Jesus is not given to exaggeration or lies, as He is the personification of truth. He is describing for us perfectly the character of Satan, who is described by the apostle Peter as an adversary one who actively opposes in 1 Peter 5: We will realize that He is in charge of all that happens in our lives, and that we are in His Hands.

How we interact with Christ as Lord and respond to others is rooted in how we communicate. Our spiritual growth and how we can connect to God with an effectual relationship is determined by how effective our prayer life is. It can be put this way: Do the things above seem ominous, too hard to do-perhaps impossible? We need to ask ourselves, why is it so hard for me to pray? If you do pray, what keeps you from praying more? Why is it hard to pray when most Christians have experienced its benefits? After all, prayer is so satisfying it soothes us.

Even secularists, who do not acknowledge God either personally or redemptively, see its power and relevance in such areas as medicine, personal improvement, and one's attitude about life. Is it a paradox or a battle? The battle over prayer is the battle over the will-ours versus the world's, God's direction versus our desires.

Do we follow God's way or our way? The battle will march on; both the casualty and the chief armament are prayer! The first casualty is that we forget! We forget what prayer is all about even after we experience it first hand. The devil desires this; what is it that you desire? Prayer clears and occupies the field for the planting and harvest, and prepares us for action and service. Yes, we struggle in prayer against the ways of Satan and his antagonism to Christ and His rule Matt. The fact is, the power and authority Satan has over the Christian was broken at the cross and his doom was sealed Matt.

Christ has given us power in His name over all the power of the Enemy. Yes, he still can persuade and manipulate, but we can resist his influences John 4: More significantly, our prayer life protects us from his assaults Matt. From my personal experiences and studies, it seems that Christians are engaged in an escalating personal, moral, and spiritual battle.

We quickly think this is all about spiritual warfare, and a lot of it is; but, that is not all of it. We are in a fight with our very selves over prayer and the growth of our soul. Those things with which we fill our life and that take over our mind and time are the munitions of this battle! We wage war between our idea of what is important, what we desire, versus what God says is important, and what we should desire.


Thus, prayer is pushed aside even when we know we need it. We are literally struggling in prayer against ourselves Rom. Prayer is at the forefront of most, if not all conflict we will face.

Prayer is the conflict because, although we need it, we either forget it or do not desire it! This is something left over from our sinful nature even though we are in Christ. We also struggle in prayer against the ways of the world. We struggle with our will that is in conflict to God's as well as the worlds. Which side of the fight will we take? Are we seeking the objectives and approval of the world or the love and approval of God? Will we fight against God or against our sinful selves John The decisive battles from the conflict with our desires, the ways of Satan, and the world are usually hidden from our mindset.

We see what we want to see, but God wants us made aware of our inner conflicts so we can fight, and so we can seek Him. He has given us the tools of prayer and spiritual growth so we can win the war within us. This is nothing new; read any biography of great Christian leaders and saints who are real prayer warriors.

They, too, have struggled on the inner battlefield, fighting out these issues of righteousness and redemption. The key to winning is to know that God is our ally Luke Our battles from the conflict with our desires will even help us grow.

The key is to lean what God has for us and trust Him! Grow means to be steadfast in faith and in Christ. We do this by pursuing holy living through deepening our relationship and experiences with Christ. Prayer is our key in this. We are called to learn as much as we can about our Lord and His teaching and then apply it wholeheartedly into our lives.

This is in contrast to the arrogance and pretentious knowledge and pseudo- growth when we do not prayer, when we do not have the time or the right attitude. When we Christians refuse to prayer we give the battle over to Satan and we become hypocrites who know little and apply none. Growing through our prayer times is an ongoing experience that should never stop until we are called home to heaven.